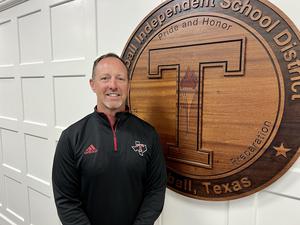 Congratulations to THS Head Football Coach and Campus Athletic Coordinator for being named the next Director of Athletics for Tomball ISD.

TOMBALL - Tomball ISD has named Kevin Flanigan, current Tomball High School Head Football Coach and Campus Athletic Coordinator, its next Director of Athletics, the district announced this week. He  will assume his new role, replacing Vince Sebo, who announced his retirement for the end of the school year.

“The future is bright for Tomball ISD Athletics with Coach Kevin Flanigan soon-to-be leading the charge,” said Dr. Martha Salazar-Zamora, Superintendent of Schools. “We look forward to him continuing the great work Coach Vince Sebo is leaving behind and we know with his energy and love for Tomball coupled with his invaluable experience as a successful coach and mentor, our Tomball ISD student-athletes will continue to thrive at the highest levels in both academics and athletics.”

Coach Flanigan will transition into this District leadership role with over 30 years of experience in Texas High School athletics and public-school education and over 25 years as a Head Football Coach and Campus Athletic Director.

He is no stranger to the Tomball community, having served Tomball High School as its Head Football Coach and Athletic Coordinator since 2017.

During his time as head coach at THS, Coach Flanigan led the Cougars to two State Playoff appearances (2018, 2021), which included a historic 2021 season, finishing as 6A State Semifinalists with an 11-4 overall record. He was named a Houston Touchdown Club Coach of the Year finalist as well as Houston Texans Coach of the Year finalist. Along with coaching his team to high success on the field, he placed an intentional focus on academics, with his team being honored as a State of Texas Finalist for the National Football Foundation National High School Academic Excellence Award along with guiding 17 Cougars to THSCA Academic All-State accolades.


FROM COACH KEVIN FLANIGAN
On the excitement of being named the next Tomball ISD Director of Athletics…
“I am extremely excited to team up with our athletes, coaches, staff and community to enhance our athletics department and push for greater accomplishments than the incredible achievements already accomplished by so many talented individuals.”

On why he chooses to stay in Tomball ISD…
"Tomball has found a way to maintain the hometown feel with the benefits of a large city because of the incredible people who have chosen to live in this community.  As a coach of 31 years, we have had the opportunity to live within and experience many communities throughout the state. Tomball is a special place and we are proud to live in this community and be a part of showcasing the accomplishments of so many.”

On what to expect from him as AD…
“I believe my greatest role in this new position is to serve our coaches by removing obstacles and providing the tools necessary for each of them to reach their potential as a leader.  I take great pride in developing leaders and derive even greater joy from developing leaders who develop other leaders.  I believe together, we are limitless in what we can achieve.”

Prior to joining Tomball ISD, Coach Flanigan served as Head Football Coach and Campus Coordinator at West Brook High School in Beaumont from 2012 to 2017. He led his team to three-straight 6A State Playoff appearances (2014, 2014, 2016), including an 11-2 season in 2016, capturing an Area Championship.

Prior to joining Crosby, he led Orangefield High School (2000-2004) as its Head Football Coach and Athletic Director, being named Orange County Coach of the Year twice in four years.His first Head Coaching position began at Troup High School from 1997 to 2000, where he also served as Athletic Director and the campus’ Anatomy and Physiology teacher. In just his second season as head coach, he led Troup HS to a 10-4 record and a 3A Regional Semi-Finalist.

Coach Flanigan began his education and coaching career in 1991 at Stroman High School in Victoria, Texas as the Linebackers and Head Strength and Conditioning Coach as well as a Biology teacher. He went on to coach and teach at Clear Lake High School (1992-1994), Caldwell High School (1994-1995) and Pittsburg High School (1995-1997) before landing his first head coaching position in 1997.

Coach Flanigan earned a Bachelor of Science in Education from Texas A&M University and has served on the All-Star Selection Committee for Texas High School Coaches Association and is a former Board Member for the Greater Houston Football Coaches Association.

He and his wife, Michelle, have two daughters Courtney and Kaylee.